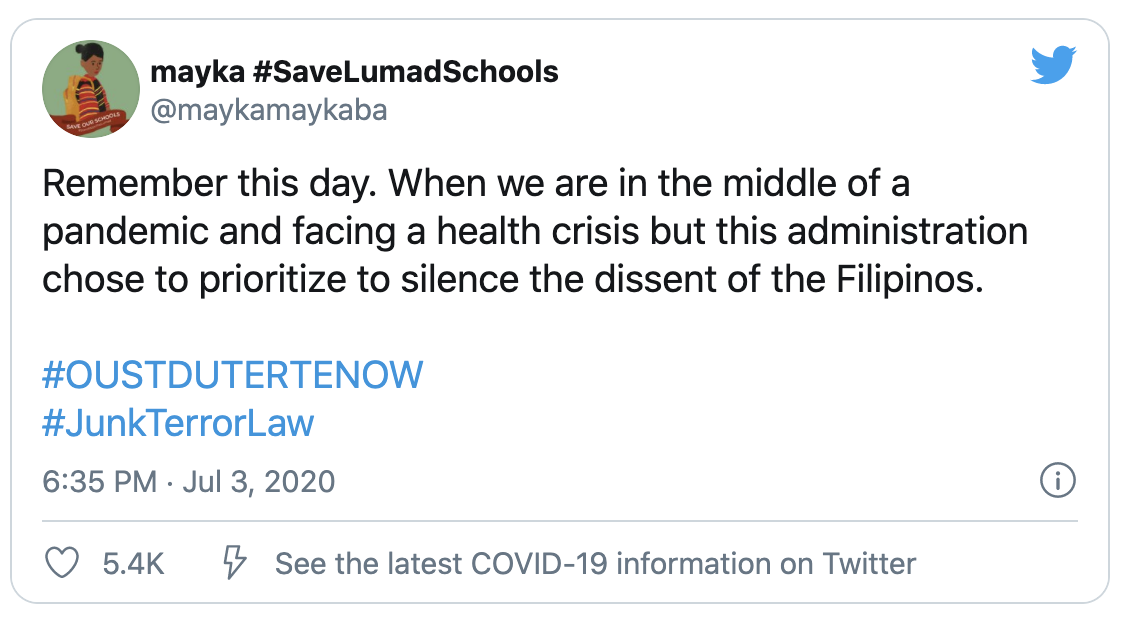 Despite a torrent of criticism and a month of protests, both online and in the streets, Philippine President Rodrigo Duterte on Friday signed into law the country’s controversial anti-terror bill, which many observers fear will be used as a cudgel to silence dissent.

The bill passed Congress in early June and has been sitting on Duterte’s desk awaiting a signature since June 9. The president had expressed support for the bill in the past, even certifying it as urgent, but the delay led many Filipinos to hold out hope that he might have a change of heart.

Human rights groups, journalists, artists, and regular citizens had spoken out against the bill on social media, while others rallied on the ground despite anti-coronavirus measures forbidding public gatherings.

The law—formally known as the Anti-Terrorism Act of 2020—is ostensibly meant to heighten security in the country by giving the police and military broader powers to go after suspected terrorists. This includes allowing the government to conduct warrantless surveillance and arrests, establishing tougher punishments for suspected terrorists, and creating an Anti-Terror Council made up of cabinet officials.

However, the new law’s vague definition of a “terrorist” sparked fear among rights groups that the government could use it against critics. Explaining his concerns, human rights lawyer Neri Colmenares cited Duterte’s “track record” of harassing journalists, politicians, religious leaders, and activists.

In recent weeks, several people protesting against the Anti-Terrorism Bill have been arrested, including 20 people at a Pride protest on June 26, and eight people near the University of the Philippines’ Cebu campus on June 5.

The law has also drawn unfavorable comparisons to Hong Kong’s recently passed national security law, widely seen as an effort by Beijing to stifle dissent. Despite assurances that the law would target only a small handful of people, police made arrests under expansive interpretations of the new provisions on the first day it was in force.

Duterte’s decision to sign the bill on Friday only served to spark further outrage among Filipinos. #OustDuterteNow was a top trending topic on Philippine Twitter as of press time, with many expressing concerns about the future of the Philippines, Asia’s first constitutional democracy and once home to its freest press.

“We are no longer free,” @reighnism wrote on Twitter.

“I am really frustrated right now. [I’m] angry. But more than these [I’m] really scared of the things that may happen in the coming days,” he added.

Opponents of the bill, however, had already promised to level legal challenges should it pass, and netizens on Friday similarly vowed to continue to fight.