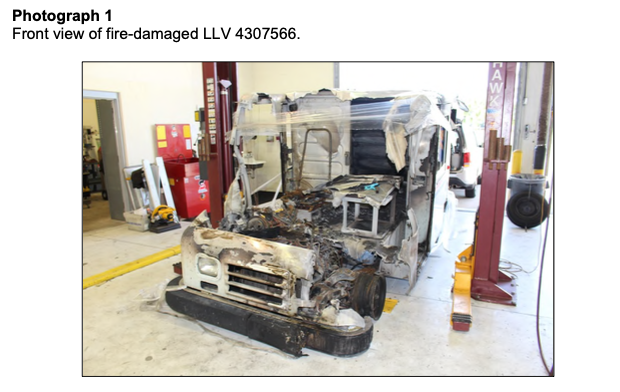 On April 30, 2016, a United States Post Office letter carrier in Fall River, Massachusetts, left his truck to do a 20-minute loop by foot to deliver some mail. When he got back to the truck, the dashboard was on fire.

The next day, on the other side of the country, a letter carrier in Chandler, Arizona loaded his truck with the day’s mail. After driving for about 10 miles, the truck lost power and the engine abruptly shut off. He pulled over, got out of the truck and called his supervisor. While on the phone, white smoke came out of the truck. He started walking towards the truck to investigate when he heard a “whoosh” noise. The truck burst into flames.

Less than 24 hours after that, in Newport News, Virginia, a letter carrier driving her mail truck heard a loud pop and smoke started to come out of the engine. She turned the truck off and by the time she got out, a neighborhood resident came running out of their home to tell her the truck was on fire.

All three of those trucks, which were destroyed in fires within a 72-hour period, were the iconic USPS Long Life Vehicles, or LLVs, featuring right-side driver seats so letter carriers can easily put mail into mailboxes. They are the vehicles you are most likely to picture if someone says “mail truck.” And all over the country, they have been bursting into flames at an alarming rate.

Since May 2014, at least 407 LLVs have been damaged or destroyed in fires, or approximately one every five days, according to documents obtained by Motherboard via a Freedom of Information Act request.

Do you work for the Post Office? Do you know anything about the LLV fires or other challenges due to the budget crisis? Send an email to the reporter at aaron.gordon@vice.com.

Motherboard reviewed 3,954 pages of documents regarding the LLV fires. The vast majority of those documents were investigation reports conducted by two different engineering firms that USPS hired to identify the cause of the fires. Those firms, Trident Engineering and Rimkus Consulting Group, declined to be interviewed by Motherboard citing confidentiality clauses in their contracts with USPS, which the USPS refused to release them from in order to discuss their findings. Kim Frum, a USPS spokesperson, said she was “unable to provide information” about whether or not there were injuries as a result of any fires.

In 125 cases, the trucks were so thoroughly destroyed that the investigators were unable to identify a probable fire cause. Of the remaining 282 fires where investigators could identify a likely cause, the only pattern was that there was no pattern.

The fires occurred in hot and cold climates, at the beginning and ends of shifts, in the battery compartments, dashboards, and fuel pumps, and in vehicles that had both been recently maintained and were overdue for a check-up. They occurred on rural routes and city streets all over the country.

Although one engineering report found occasional lax maintenance practices that may have resulted in an increase in the number of fires, the most likely explanation for the fires is that the trucks are simply too old and are deteriorating on the road.

The LLVs were purchased between 1987 and 1994 and manufactured by Northrop Grumman to last for approximately 24 years on average, according to a 2015 USPS presentation. That means the LLVs still in service range from 26 to 33 years old, well past their useful lives. As of 2014, about 142,000 LLVs were still in service. Asked for an updated figure, Frum said “there are more than 141,000 right hand drive (RHD) LLVs in our fleet.”

As far back as 2015, the Post Office and the National Association of Letter Carriers, the union that represents city delivery letter carriers, connected the increased LLV fires to the vehicle age. A July 2015 newsletter from the NALC’s Region 7—which covers North Dakota, South Dakota, Minnesota and Wisconsin—had a section on “Dangers of Melting USPS Vehicles.”

“USPS vehicles catching fire is becoming more frequent as the fleet ages and is in dire need of replacement,” the newsletter said. “This is a very dangerous situation and union leadership must educate the membership and monitor managements [sic] compliance with vehicles scheduled maintenance requirements.” A spokesperson for the NALC did not respond to a list of questions before publication.

These warnings, if heeded, had little effect on the number of fires, which have hovered around 70 per year since 2016.

Source: data tabulated by Motherboard from documents obtained via Freedom of Information Act request. Chart made by Hunter French

The desperate need to replace these decrepit vehicles has coincided with a manufactured budget crisis for the Post Office. Thanks to a law passed in 2006 called the The Postal Accountability and Enhancement Act, the USPS has to set aside $72 billion to pay for the health care of its current and future workforce for the next 75 years, an obligation that the Institute for Policy Studies noted “applies to no other federal agency or private corporation.” Without that arbitrary requirement, the USPS would have actually turned a profit over the last six years. Instead, it has been billions in the red and, exacerbated by the pandemic financial crisis, is facing financial ruin by next year unless Congress intervenes.

Partly as a result of the budget crisis, the USPS has failed to execute longstanding plans to replace the LLVs. Starting in 2011, it put together a plan to replace the LLVs, first with a 25,000-vehicle purchase to replace the oldest trucks, followed by a larger purchase to gradually phase out the entire fleet starting in 2017 with a next generation vehicle. According to the aforementioned 2015 presentation to potential suppliers of the new vehicles, the USPS had expected to begin receiving the next generation vehicles in January 2018. However, the USPS has yet to even decide on a vehicle. Frum said they expect to do so by the end of the year.

Despite these trying circumstances, at least some letter carriers demonstrated a remarkable dedication to making sure their mail gets delivered. Most of the investigations included interviews with the letter carriers driving the trucks and a short narrative of what they witnessed. Twenty-six of the reports mention the letter carriers went into the burning trucks to save as much mail as they could.

Do you work for the Post Office? Do you know anything about the LLV fires or other challenges due to the budget crisis? Send an email to the reporter at aaron.gordon@vice.com.

The 3,954 pages of fire investigation reports can be viewed here. Note: the PDF is about 400mb.