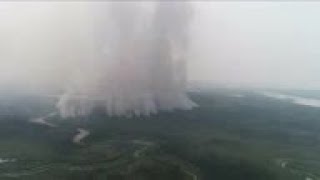 The Arctic Circle, a region typically known for its chilly climate and icy landscape, is suffering from a record-breaking heatwave that has sparked widespread wildfires and unprecedented greenhouse gas emissions. The fires are a grim reminder of the outsized effect of climate change on polar regions, which are warming at nearly three times the rate of the rest of the world.

Within the last month alone, fires in Siberia released an estimated 59 megatonnes of carbon dioxide, breaking the previous record of 53 megatonnes set in June 2019, according to CNN. Those one-month numbers are on par with the carbon dioxide emissions of nations such as Ireland or Portugal over a full year.

“The Arctic is figuratively and literally on fire—it’s warming much faster than we thought it would in response to rising levels of carbon dioxide and other greenhouse gases in the atmosphere, and this warming is leading to a rapid meltdown and increase in wildfires,” Jonathan Overpeck, a climate scientist at the University of Michigan, told the Associated Press.

“The record warming in Siberia is a warning sign of major proportions,” he added.

Flames consume swaths of the Arctic every spring and summer, most notably in Siberia, but this year’s wildfires had already swept across at least five million acres by May, even creeping into far-North locations that rarely burn.

The rapid and early spread suggest that remnants of last summer’s Arctic wildfires, which were also far-reaching and intense, may have survived underground over winter and reignited with the spring thaw, a phenomenon known as “zombie fires.”

From January to May, the region logged temperatures that are about 8°C (14°F) higher than average, according to the Associated Press. At the summer solstice in June, the Arctic community of Verkhoyansk topped 38°C (100°F) for the first time in recorded history. These new peaks follow a broader global trend of warmer temperatures with each passing year, though the consequences of the climate crisis are particularly pronounced in the Arctic.

The sweltering weather has also thawed out huge amounts of permafrost, a vitally important layer of frozen soil that is widespread in polar regions. Climate change is accelerating this thaw, which reduces permafrost’s ability to curb fires. It can also cause major infrastructure damage: Earlier this summer, more than 20,000 tonnes of diesel leaked into a Russian Arctic river after a fuel tank ruptured because, the company said, it was positioned on unsteady permafrost.

Permafrost thaw is also concerning because this frozen layer stores enormous amounts of carbon that gets belched into the atmosphere as it melts in hot weather, or burns in seasonal fires, further escalating the forces driving climate change.

Therein lies a vicious cycle: Warming global temperatures thaw permafrost and amplify fires, causing serious spikes in greenhouse gas emissions, which are the primary driver of warmer temperatures in the first place. The continuation of this nightmarish feedback loop will have dire consequences not only for Arctic communities, but for the entire planet, which is why scientists consider it to be one of the most important potential climate “tipping points” to keep tabs on.

While Siberia is the epicenter of this Arctic inferno, fires are also ravaging other high-latitude regions in Greenland, Northern Canada, and Alaska.

The burning is expected to continue until at least the end of August, by which time 2020 may be officially declared the worst year of Arctic wildfires yet—though we can expect this sad record to be reset again and again over the coming decades.

Buy me a coffee?